The Murder of Sonny Tawhiao

Background- The death of Sonny Tawhiao.

They were wrong- this is a case of murder.

With the ownership of Matakana Island local iwi company Te Kotukutuku (TKC) had suddenly become worth hundreds of millions after it's 1998 Court of Appeal win in the case of Arklow vs Maclean. But coming up in October 1999 was the Privy Council hearing that would either cancel or allow TKC ownership of the Matakana land.

The Government and the Courts were told the Waitangi claims would cease if they helped TKC get ownership. So in 1994 Justice Greig allowed merchant bank Far Financial the right to sell Matakana land to TKC.

Far Financial was at the time under claim they had stolen the deal from Arklow Investments after viewing in confidence how Arklow were structuring their bid. Arklow was going to get 10,000 acres of Matakana land for free under the method they had devised. Far could see this, they were broke and desperate at the time and ran off with Arklow's deal.

TKC told the court the land was sacred and must be returned to its rightful owner and so Justice Greig lifted Arklow's caveats and allowed the sale to proceed. In May 1997 after a 4 week trial Arklow won its claim against Far Financial. The judgement is very clear.

The leaders of the tribe including their chartered accountant Graeme Ingham, Chairman of Ngaiterangi Iwi Howard Palmer, Chairman of the Matakana Island charitable trust (MIT) John Neill and Chairman of Tauranga Moana Trust Enoka Ngatai, Don Shaw and others had control of shares of TKC.

Keeping everything secret from the people they were meant to represent a frustrated Sonny Tawhiao called Wingate of Arklow seeking information. After being provided with the truth in a file of document an inch thick Sonny Tawhiao began canvassing the islanders to take a stand against the Tribe's leaders accusing them of corruption and breach of fiduciary duty. The more Sonny complained the more the death threats increased. In the weeks leading up to his death certain witnesses have said Sonny had pushed them away fearing their lives were also in danger. The Privy Council case was October 1999. Mr Tawhiao was killed 7 July 1999.

The official police report suggests- Sonny took a can of petrol from his boot of his car, removed his green knitted top and both gumboots and set fire to them at the rear right wheel. Police suggest he lit the petrol first then threw the top and boots into those flames. He then poured petrol throughout the interior of the car and then poured petrol under the boot leading up to the left front door which was left slightly ajar. He then put the petrol can into his boot. Police say he then got into the car and lit the car on fire. 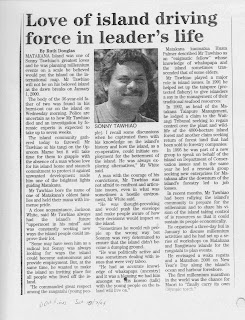 TAURANGA - Mourning Matakana Islanders hold a tangi today for a young community leader whose charred body was found in the back seat of his blazing car on Wednesday.

Sonny Tawhiao, aged 36, was passionate about Matakana, an island in Tauranga Harbour, and had big plans for it.

His body was returned from the Tauranga mortuary yesterday to lie at the local marae.

Police are "98 per cent sure" Mr Tawhiao was the fire victim, but final confirmation must await the results of forensic tests, which could be six to eight weeks away.

In the meantime, they are still officially treating the circumstances as suspicious. Police are not looking for anyone else in connection with the death.

After the funeral, the forest site at the southeastern part of the island where Mr Tawhiao's car was found will be blessed, and the vehicle buried there.

Adopted into a Matakana Island family as a baby, Sonny Tawhiao spent most of his life there, apart from a stint as an adolescent in Auckland.

He had been married, but lived with his two young sons and his father on the island.

Mr Tawhiao's focus was on planning for the new millennium, Mr Palmer said.

He was rallying the community to help to attract visitors to the island and take advantage of America's Cup opportunities.

"He was maybe ahead of his time with some of his more radical ideas.

"But he involved a lot of the young people on the island, who looked up to him and had a lot of respect for him."

Although not a Maori speaker, Sonny Tawhiao had wide knowledge of whakapapa, Matakana Island history and "things Maori."

He was very intelligent, if a little enigmatic, Mr Palmer said.

"He seemed to have a finger in everything and was quite far sighted. He certainly had things sussed out for the future," said Mr Palmer.

An exclusive 200-home, Pauanui-style residential retreat built around man-made canals and private beaches is proposed for Matakana Island near Tauranga.

Pritchard Group says the development, known as Matakana Waterways, could begin late next year and be completed in 2007.

TKC chairman John Neill said the project would be an economic boost for the island.

"We have housing and employment issues over here. People are living in sheds and caravans and are looking for work. That's not good for the future of the island."

A battle by Matakana Islanders to save their home from a Pauanui-style canal development is headed for the High Court.

Two-thirds of the island's population, more than 100 people, have threatened to burn down the planned 200-home waterways project if it goes ahead.

The Matakana Island Trust, made up of island residents and their families, had a 51 per cent shareholding in its commercial arm, TKC Holdings, which is driving the Matakana Waterways project, until last October.

When shares in TKC were distributed to individuals, the trust was rendered incapable of making decisions about the island's future.

Lawyer Quentin Duff said he would seek a High Court decision on the share distribution.

Plans for development of areas around Tauranga Harbour have been on the drawing board a long time.

Matakana Investment Group bought all the shares in Te Kotukutuku Corporation - and as a result the group has taken control of the large forested block on the eastern side of the island.

The proceeds of the sale - the amount was not disclosed - went to 27 family groups either living on, or having strong connections with the island.

The bulk of the money was paid out to local shareholders earlier this year but an amount has been retained in a trust.

Up to twelve groups resisted the sales and have retained shares in smaller blocks of land.

TKC Holdings, the commercial arm of Te Kotukutuku, had been looking to develop some of its land for 15 years to improve the prosperity of the island.

TKC Holdings eventually formed a joint venture with Kapiti-based development company Pritchard Group which had plans for an exclusive Pauanui-style residential retreat built around man-made canals and private beaches on 75ha of the coastline near Hunters Creek sawmill.

There was going to be up to 200 sections and eight canals with access via a single waterway on the harbour side of the island.

Pritchard's project, called Matakana Waterways, was unveiled four years ago - but the development company backed off because of a local opposition.

"We got such a hard time that everything was put on hold till we got our plan properly together," said David Pritchard, chief executive of Pritchard Group.

Pritchard Group is one of eight investors in Matakana Investment Group which was incorporated in September 2004. The investors come from Wellington, Otaki, Raglan, Auckland and Tauranga.

A Matakana Investment director Brian Fitzgerald told the Bay of Plenty Times that his group will fit in with want the local community wants - it could be a marine project that takes place over 30 to 50 years.

He said there still wasn't any plans drawn up and the investment group had to go through the resource consent process.

Earlier, Pritchard had organised a 200-year lease with TKC Holdings on the 75ha development area. TKC hoped to use revenue from the waterways development to fund educational and technical training scholarships for the Matakana Islanders.

However, it then decided to sell its land. Former TKC chairman John Neill said some of the shareholders were getting older and wanted to enjoy their money; it was a bit of a windfall.

He said they had spent a lot of time on development proposals and they were approached by the Matakana Investment Group.

"I guess they got fed up with the continual aggravation and annoyance about people stepping in at the last minute and scuttling the plans. It became very bitter and the (TKC) shareholders just wanted out - they had fought for so long."

Mr Neill felt the new landowner could achieve more, and he was confident the majority of the 2000 ha block would remain in forestry. 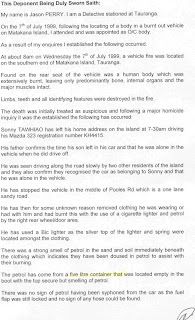 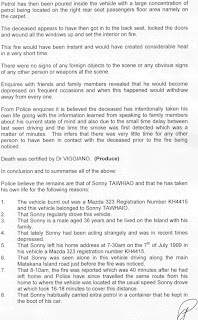 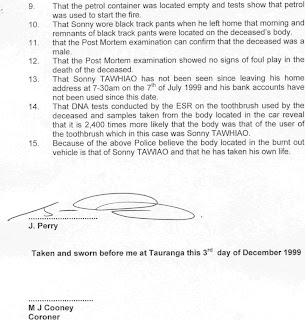 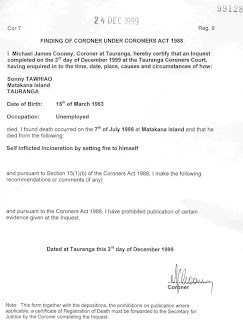 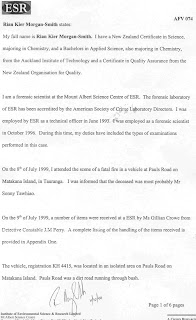 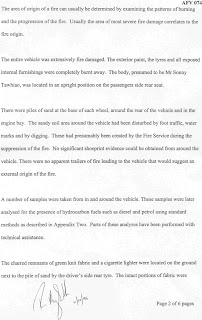 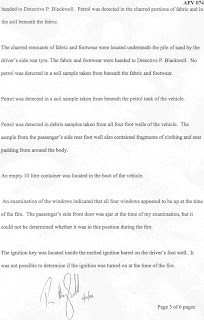 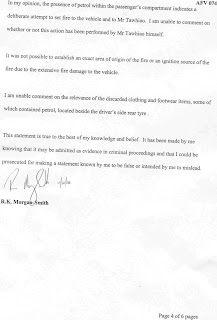 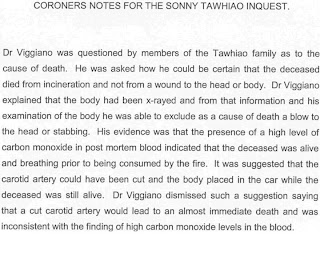 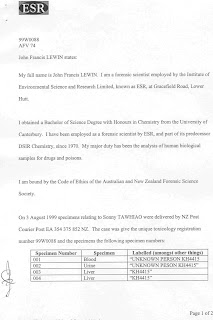 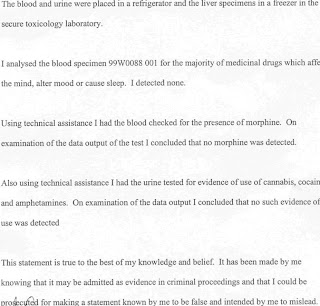 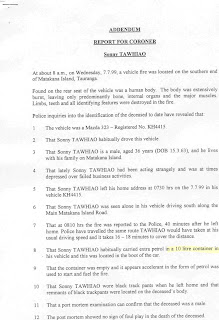 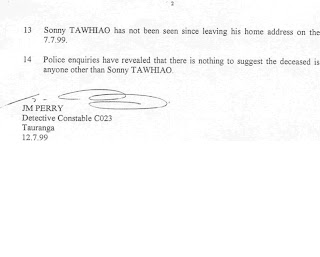 This file is still in progress.

Currently ; Media have been threatened ( Maori TV), The Island residents are living in fear, The Iwi leadership have sold the sacred land for $75m something Sonny was claiming through the Waitangi Claims process. The difference was Sonny was claiming the land for all the people where as the Ngaiterangi leadership wanted it for themselves. Sonny's death paved the way for that to happen. The police file contained many witness statements Sonny's life was being threatened. But police ignored those facts. In the weeks leading up to his death he asked people on his committee to keep away as he felt danger was increasing. His body was found 7 July 1992. The police Detective signed his death certificate as suicide 12 July despite family and others saying his life was in danger from a senior Maori leader who recently (July 2007)cashed up his shares for $20m.

Links you need to read

How the government helped TKC

NZ is being ruined for Maori and Pakeha

The thieves of TKC- the people who sold the people out
http://lawisanass-wingate.blogspot.com/2010/05/tekotukutuku-shareholders-note.html

The Matakana Film
The Film Team so far http://humansheep.blogspot.com/2010/10/australian-feature-film-project-housing.html

The ABC Interview http://www.youtube.com/watch?v=VvoNNvLrJn0
Posted by Wingate at 3:32 PM 7 comments: